Eero_Tuovinen
August 2018 in Actual Play
As I've mentioned a few times over the summer, we've been gearing up to play a full-length treatment of my Chronicles of Prydain microcampaign this summer. We've just now finished the first adventure in session #4, and I'm thinking that I might do a bit of logging of the experience for later review.

The earlier thread describes the creative agenda and general technical strategy of the campaign pretty fairly. I've revised the campaign structure slightly, increasing the number of individual adventures to 13 (including three mostly made from scratch, rather than directly based on plot material from the novels). The GM prep has piled up quite a bit as I've developed campaign-specific subsystems - ways to handle travel, companion NPCs and other things important to the subject matter.

The start-up estimate for the length of the campaign is around 30-ish sessions, as each individual adventure is expected to take about two sessions. My preparations are very top-down in nature, and the prep will in practice be completed only on a per-session basis: while the general systemic conceits all exist at the start, and there is a firm campaign content overview, the particular details of the individual adventures will be roughed out closer to when those adventures will be needed. I'm advancing in this manner to maintain my own interest in the project, as my attention often starts straying once the design and development portion of a given project is finished; I want to still be discovering new things as the campaign progresses, to maintain my creative edge and surf the inspiration to the end. I also hope to hone my railroad princess adventure prep skills and miniatures combat capabilities as we go on, so as to apply the lessons learned to later content in the campaign.

As part of the pre-campaign prep I've created a "Pokedex" of the monsters featured in the campaign. Although I haven't written down the details on each individual adventure, I know their gist, and it's therefore easy to figure out the monsters. The campaign features 57 different monsters in 10 different factions, and roughly 40 named NPCs. I've given the players a Pokedex folder of sorts in which they get to add the monster stats as we go along - I write them up and provide representative illustrations, present them in play, and the players maintain our on-going reference for later need. As the same monsters recur quite a bit (some more than others), it's useful to have the notes on them organized in one place.

An interesting facet of the campaign prep is that a significant portion of the gaming group has started reading the Chronicles of Prydain alongside the gaming project. It isn't very usual for a GM to inspire players to actually read entire books, so I'm not complaining. I generally get the sense that reading the background material increases

After considering a number of alternatives, here's what I ended up selecting for our initial combat presentation tech:

A Chessex Battlemat: A vinyl mat with printed squares and water-soluble color markers fulfills certain requirements I consider essential. Most importantly, it removes the necessity for the GM to design combat environments in advance (which would be the case with printed combat environment posters of the sort that 4th edition publications favour), allowing us to negotiate the particulars in a much more fiction-fluid way. When combat occurs we can just figure out the terrain on the spot and draw it in. 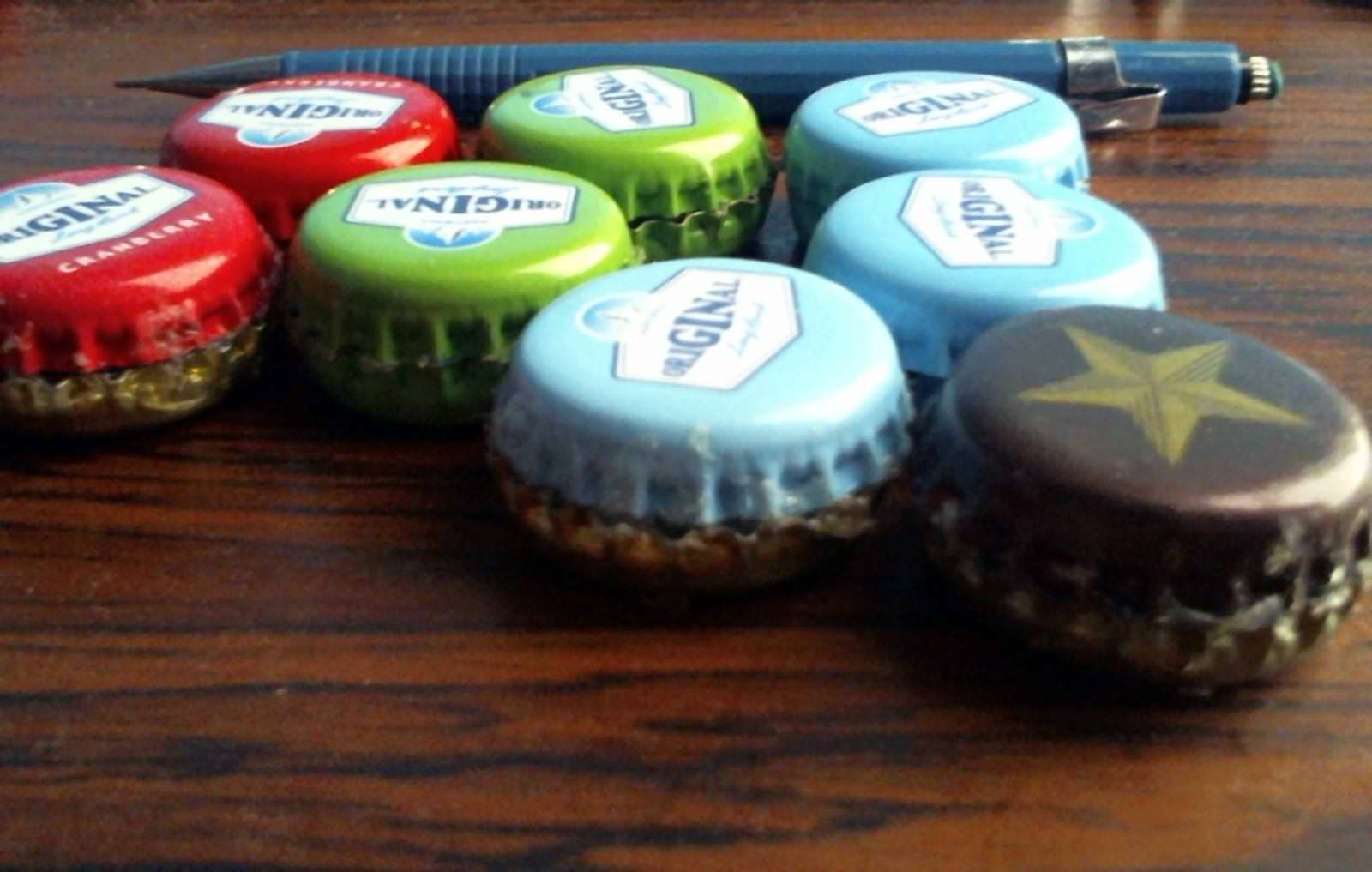 Abstract monster tokens: I decided to use abstract tokens for monsters instead of representative pieces so as to remove the necessity to create individual pieces for every monster we feature in the game. I wanted nice-looking tokens, though, which is why I made a little of DIY of it: gluing together two bottle-caps in the appropriate color makes for appropriately sized pieces in distinctive colors and with a nice tactile feel. (Hint: adding metal scrap inside improves the weight, too.) I'll probably number these at some point as well, to make tracking easier. 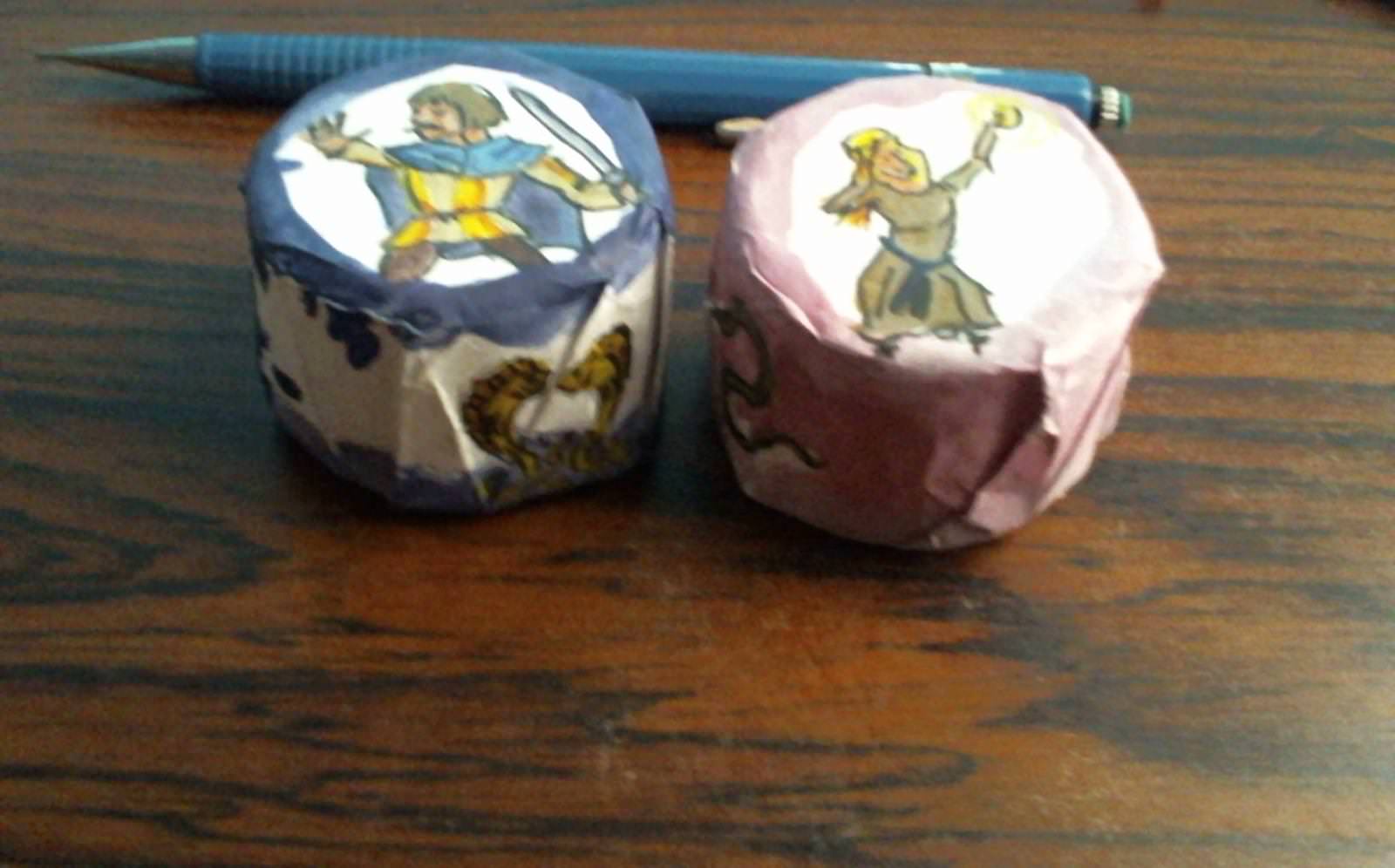 Individualized NPCs: Unlike monsters, I wanted to emphasize the NPCs on the battlemap. The solution I ended up with is an appropriately chunky bottle-cap wrapped in paper, painted over by an arts-inclined player - nothing too work-intensive, but enough to make the character distinctive. Using plentiful heraldic color in the pieces helps them stand out from each other when we have multiple named NPCs on the board at once.

Individualized player characters: We could do the player characters with the NPC technique, but there is some miniatures interest in the group, so we're doing custom miniatures for the PCs, instead. We've started with some generics from one player's collection, but I understand that there are plans for modding/painting something more specific to the characters later on.

The particulars of how we run the combats are subject to change as experience accumulates, but at least early on this seems like a pretty solid approach. The biggest issue has been cleaning the battlemat - the markers have a tendency to get stuck on it, requiring an alcohol rub to get it out. Using a different brand of marker pen might help for that.

More on the actual sessions later. I'm trying for a reasonable amount of detail in this log, in case I need to reference something later in the campaign.
[D&D 4th] Chronicles of Prydain campaign notes - Page 2 - Story Games
Story Games
Home › Actual Play
Sign In · Register

It looks like you're new here. If you want to get involved, click one of these buttons!